Waec Past Questions and Answer

The resources below on Economics have been provided by WAEC to assist you to understand the required standards expected in Economics final Examination. Students’ performance in the examination under review was done by the Chief examiner Questions.

The contents in each WASSCE Economics question paper (for a specific year) are usually similar from one country to another. Questions on the WASSCE Economics section may be specified to be answered by candidates.

The standard of the paper was good and did not deviate from those of the previous years.  The questions were straightforward, unambiguous, and spread to cover most aspects of the Syllabus.  The rubrics were clearly stated.

However, there has been so much significant improvement in the overall candidates’ performance compared with those of the previous years because of the Past question that student engages themselves

Waec Economics Past Question and Answers for 2021/2022

Carefully read and take note of the following questions and try to answers by choosing the option that best suits the question after that use your textbook to confirm it. Let get started with the Waec Past Questions and Answer

1. Scarcity in economics means that _______
A. human wants are limitless
B. the economy has very few resources
C. the economy can scarcely produce anything
D. resources are limited.

4. Efficiency in production involves _______
A. reducing the size of the workforce
B. producing a given output with the lowest cost combination of factors of production
D. increasing the quantity of the fixed factor of production.

5. An effect of inflation is that it ___________
A. discourages trade by barter
B. favours debtors at the expense of creditors
C. increases the real income of salary earners
D. increases the value of a country’s exports.

7. The diagram below shows a production possibility curve for maize and cotton. 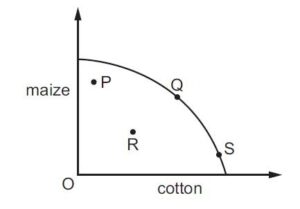 
9. A demand curve shows the relationship between the quantity demanded and ________
A. a change in income
B. consumer tastes
C. the supply of the product
D. the price of the product.

10. A government subsidizes the production of pineapples. This is likely to _______
A. increase the price of pineapples
B. raise the costs of supplying pineapples
C. raise revenue for the government
D. cause the supply of pineapples to increase at every price.

13. A German car manufacturer decided to produce its cars in a factory in China. What would not be a reason why they might have chosen to do this?
A. cheaper wage costs in China
B. the availability of raw materials
C. to gain external economies from skilled labour in China
D. to increase Germany self-sufficiency.

16. One of the most important factors that should be considered in the location of an industry is _________
A. nearness to the financial centre
B. assured patronage by government functionaries
C. availability of inputs and market
D. availability of adequate security.

17. What is the term used to describe a policy aimed at promoting the local production of goods which are usually imported?
A. deregulation    B. import substitution     C. tariff reduction    D. backward integration.

20. Which of the following reward is associated with entrepreneurship as a factor of production?
A. salaries      B. profits     C. interest     D. rents.

21. In a market economy, the question of what, how and for whom to produce are solved by the ________
A. elected representative of the people
B. planning committee
C. price mechanism
D. government.

23. Which of the following factors is NOT responsible for the rural /urban drift in Nigeria?
A. the infrastructural facilities in the cities
B. declining fertility of rural farmlands
C. rural electrification programme
D. higher living standards in urban areas.

24. The necessity of choice is due to the fact that _______
A. human wants are inelastic
B. customers like to maximize satisfaction
C. resources are abundant
D. consumers are selective.

1. One of the advantages of large scale production is that
A. there is a rise in the cost of administration.
B. consumers sacrifice their individual tastes.
C. the firm can use labour-saving machinery.
D. the demand for a firm’s products becomes localized.

28. The location of timber and plywood industries in West Africa is mainly influenced by the availability of
A. transport.
B. water.
C. raw materials.
D. labour supply.

29. Malthus’ population theory states that
A. high death rate may lead to low productivity.
B. population may outgrow the means of subsistence.
C. people will always decide to have children.
D. migration may leave some parts of the world barren.

30. Which of the following is not likely to be an effect of a growing population?
A. Rise in demand
B. Unemployment
C. Fall in standard of living
D. High per capita income

31. Personal savings are generally low in West Africa because of
A. the level of income of the people.
B. the refusal of banks to grant loans.
C. overpopulation.
D. cheaper foreign currencies.

32. Devaluation of currency in a country is likely to lead to
A. increasing population.
B. increasing imports.
C. exports becoming cheaper.
D. reduced exports.

7. Which of the following is not a benefit derived from the petroleum industry?
A. Increased foreign exchange earnings
B. Establishment of refineries and petrochemical industries
C. Employment of a greater proportion of the population
D. Development of airports, seaports and other social infrastructure

33. An efficient weapon used in resolving disputes between employees is
A. co-operation.
B. collective bargaining.
C. display of placards.
D. legal action.

35. Which of the following features best describes peasant agriculture in West Africa? It
A. specializes in the production of one crop.
B. involves the use of small farm holdings.
C. is a capital-intensive system of farming.
D. is mostly associated with tree crops

If actually, you are finding anything so complicated or questions you want to ask kindly drop it down in our comment box below and we promise to attend to you the moment it gets to us.