If You want to be getting the answers very early, then subscribe for our WAEC runz

(3a)
Consumer goods are products bought for consumption by the average consumer. Alternatively called final goods, consumer goods are the end result of production and manufacturing and are what a consumer will see stocked on the store shelf.

(3bi)
fixed capital is conventionally defined as the stock of tangible, durable fixed assets owned or used by resident enterprises for more than one year.

(3biii)
Circulating capital is money being used for core operations of a company.

(4ai)
Capital expenditure is primarily expenditure on the creation of fixed assets and on the acquisition of land, buildings and intangible assets. While Recurrent expenditure refers mainly to expenditure on
operations, wages and salaries, purchases of goods and
services, and current grants and subsidies.

(4aii)
Monetary policy refers to government activities that are directed toward influencing the quantity of money and credit in an economy. While Fiscal policy involves the use of government spending and revenue raising (taxation) to impact a number of aspects of the economy

(4b)
(i)General Administrative Purposes The administrative machinery of a country may collapse if there is
no money to maintain it; tax therefore forms one of the sources of
such money.

(iii)The Maintenance of Law and Order For internal peace and stability of a country to be guaranteed, laws
must be made and executed, which require money.

(6a)
Money is any commodity that is generally accepted in payment for goods and services or settlement of debt. It is an economic unit that functions as a generally recognized medium of exchange for transactional purposes in an economy and at the same time acts as a measure and store of value.

(6bii)
Demand for money: This is the desired holding of financial assets in the form of money. In other words, it is cash or bank deposits rather than investments. It is sometimes referred to as liquidity preference.

(8b)
(i) It is usually grown in a piece of land where the land is quite small in the area.
(ii) This type of farming is usually done for the food crop where the farming is done just to satisfy the requirement of the farmers family and not for the purpose of selling it into the market.
(iii) The machineries which are used for the farming process usually primitive.
(iv) Primitive form of irrigation or little irrigation is done for this type of farming.

(8c)
-Positive effects-
(i)It serves as source of revenue for the government
(ii)It creates job opportunities for people in the area. 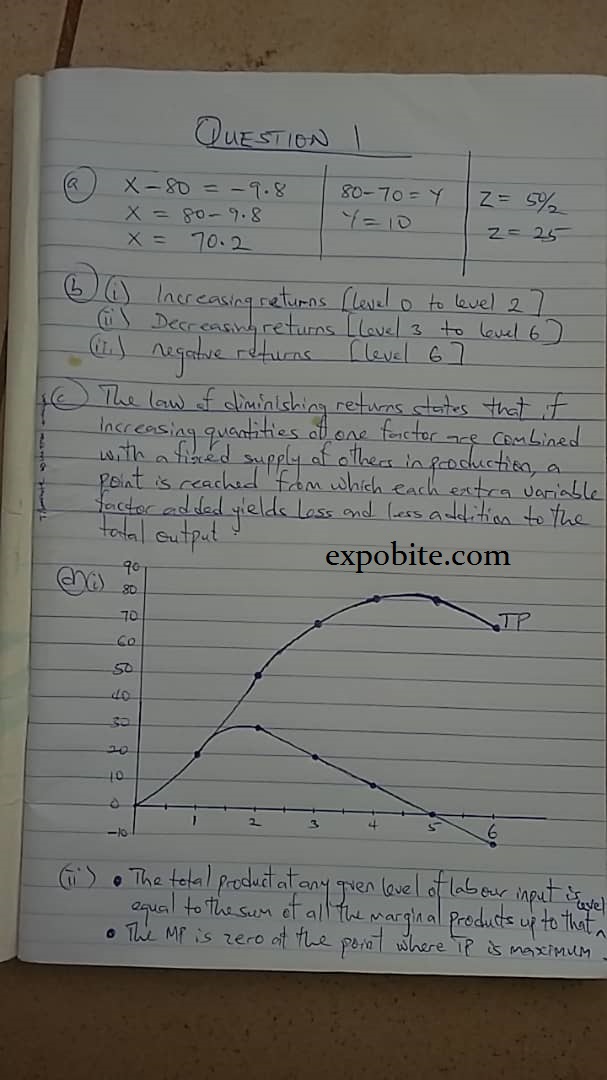